"The Hidden Land Back to No Man’s Land in Northern Tibet" will be shown on 8.31 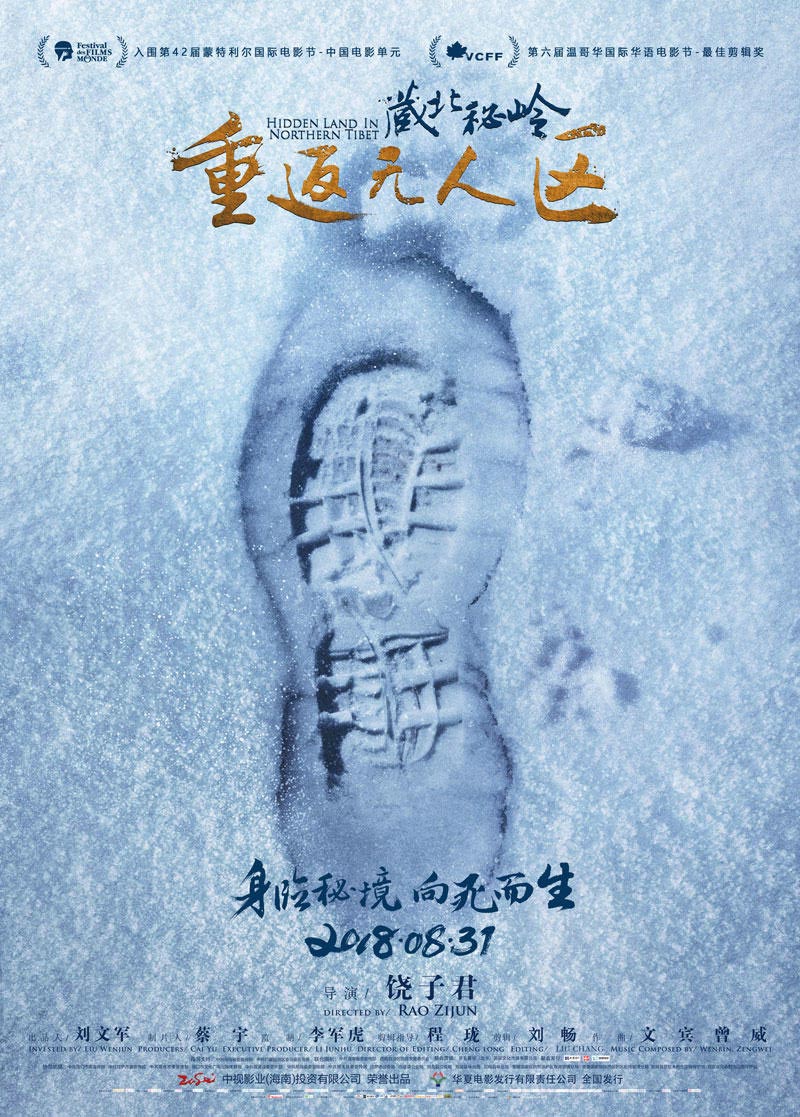 Recently, the first documentary exhibition in China, directed by the new director of the post-95s, Rao Zijun, to show the large-scale documentary adventure film “The Hidden Land Back to No Man’s Land in Northern Tibet " in the hidden land of the Qiangtang area of Tibet, officially announced on the August 31. In the poster, a clear and powerful little footprint is stepped on a fading, large footprint, time overlaps in space, and emotions relay in action. This picture is closely related to the film's theme of "return", which radiates hot emotions and has extraordinary significance.

A trip to Tibet in 2000 allowed the director Rao Zijun's father to become an independent mountaineer from the company's executives. He once said: "Mountaineering is not a conquest, but a challenge to oneself and closeness to nature." With ideals, tenacity and passion, he has climbed 18 of the world's snow-capped mountains, 10 of which are 8000-meter snow peak. However, in a mountaineering accident, his dream of climbing the "14 Grand Slams" came to an abrupt end.

The father’s feelings for the snow mountain continued in Rao Zijun. In order to cultivate her rock climbing ability and stimulate her physical potential, she will be allowed to practice rock climbing skills when she is young. In 2012, Rao Zijun followed his father into Tibet to carry out altitude training. After her father passed away, she did not get involved in the no-man's land, but she has always been attached to this painful plateau. She hopes to start a true farewell with her father in here.

For Rao Zijun, “The Hidden Land Back to No Man’s Land in Northern Tibet " is not only his own director's debut, but also means the unbearable weight of her life.

To this end, she can huddle in a small wagon that can only cross-legged in five days and five nights, from Shenzhen across 8000 to Lhasa.

In order to complete the shooting, she can insist her own mind, even anyone can’t accept.

She can drag the body with severe respiratory syndrome and "change her life" on the plateau at an altitude of 6,000 meters.

She can calmly face the cold climate, hunger, death in the no man's land...

The filming process lasted nearly 40 days, with a total journey of 3441.511 kilometers. The film crew of 48 people finally insisted on only 8 people who completed the filming.

When she appeared in the crowd of triumph, she used her own footsteps in the no man's land to complete the mental connected with her father.

In an article written to his father, Rao Zijun wrote: "Everyone can do his best in life for at least one thing he wants to do." Her father did it. Now she has done it, and will continue to do so.

With an unprecedented adventure and fascinating real-life images, “The Hidden Land Back to No Man’s Land in Northern Tibet " has won the Best Editing Award for the Documentary Film Unit of the 6th Vancouver Chinese Film Festival "Red Maple Leaf Award", and entered into competition of the 42nd Montreal International Film Festival, Canada. The film was exclusively produced by ZOSE PICTURES (Hainan) Investment Co., Ltd., jointly sponsored by the Propaganda Department of the CPC Hainan Provincial Committee, the Tibet Autonomous Region Tourism Development Committee and ZOSE PICTURES (Hainan) Investment Co., Ltd. issued by Huaxia Film Distribution Co., Ltd., and will be shown on August 31, on the national theater officially.